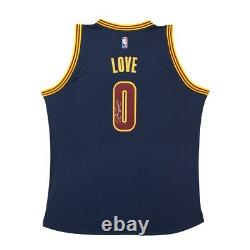 Kevin Love Autographed Swingman Jersey This item is not limited The fifth overall pick in the 2008 NBA Draft, Kevin Love came off the bench in his debut on 10/29/08 and managed 12 points and nine rebounds in just 18 minutes of action. It was a sign of things to come as his production steadily increased greater than the rate of his playing time. He finished his rookie year with a whopping 29 double-doubles as he established himself as one of the best two-way big men in the league. Two years later, he surpassed Moses Malone and set a new NBA record since the merger when he recorded his 52nd consecutive double-double.

He has continued to improve his perimeter game as he has become one of the top shooting big men in the NBA. He nailed six 3-pointers twice in a four-game span at the end of November 2015 as he averaged 19.9 points and 11.8 rebounds per game that month. He has teamed with LeBron James to form one of the top frontcourt tandems in the NBA. Love has signed this Swingman Adidas Cleveland Cavaliers blue alternate jersey in silver paint pen.

His signature is deemed authentic by virtue of Upper Deck Authenticated's Five Step Process. Cardboard Legends is proud to announce that in 2016 we became an.

The relationship allows us to provide you a robust catalog of the greatest memorabilia being produced today. While we make every effort to keep our inventory numbers as accurate as possible, it can sometimes take several days for quantities from Upper Deck to be adjusted, which may result in an item no longer being available. Framed items may be even longer to process at this time. Due to the mechanics of our relationship with Upper Deck, we cannot provide specific photos and information about the exact item you will receive.

Autographed guaranteed and certified by Upper Deck Authenticated (UDA). This item has been hand-signed by the athlete or athletes.

This is NOT a reproduced autograph. This item is in the category "Sports Mem, Cards & Fan Shop\Autographs-Original\Basketball-NBA\Jerseys". The seller is "cardboardlegendsonline" and is located in this country: US.