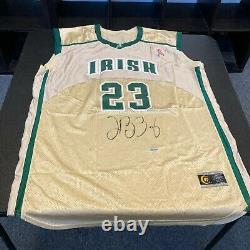 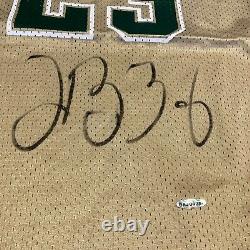 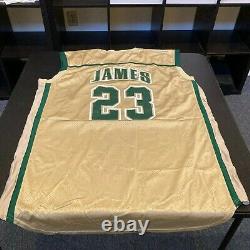 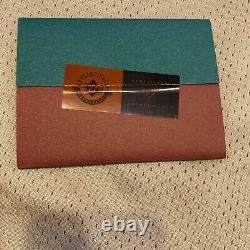 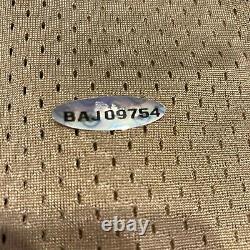 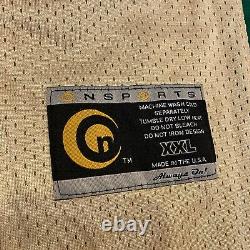 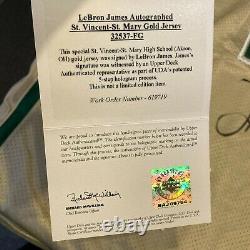 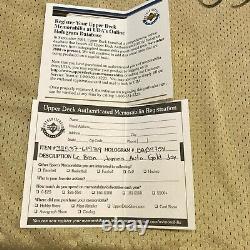 Offered is a LeBron James signed St. Mary Fighting Irish #23 gold high school basketball jersey. The three-time National Basketball Association champion and NBA Finals Most Valuable Player signed his name in black marker on the lower front of the gold mesh jersey, below the green with white accent silk-screen "IRISH 23" imprint. The green elastic collar has a "Fighting Irish" logo at the V-neck in black, white, and gold, while the left shoulder has red, white, and blue stars and stripes ribbon patch sewn on.

The shoulders and sides have green piping and stripes, while the sleeve cuffs are in green and gold cloth. The back of the jersey features "JAMES 23" in green with a white accent silk-screen imprint. James played basketball for St. Mary High School in his hometown of Akron, Ohio, where he was heavily touted by the national media as a future NBA superstar.

A prep-to-pro, he joined Cleveland in 2003 as the first overall draft pick. Named the 2003-04 NBA Rookie of the Year, he soon established himself as one of the league's premier players, winning the NBA MVP Award in 2009, 2010,2012, and 2013. This item comes with a COA from Upper Deck Authenticated for the signature.

We offer the finest in Sports Memorabilia and autographs. This item is in the category "Sports Mem, Cards & Fan Shop\Autographs-Original\Basketball-NBA\Jerseys". The seller is "showpiecessports" and is located in this country: US. This item can be shipped to United States.