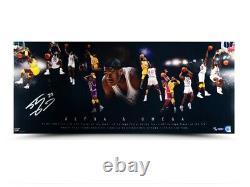 Shaquille O'Neal Autographed 36X15 Photo Limited and Numbered to 75. You will receive a random serial number.

Shaquille ONeal is one of the greatest basketball players to ever play at Louisiana State University better known as LSU. During his three seasons with the LSU Tigers, ONeal dominated the SEC and was named conference Player of the Year and consensus first-team All-American two years in a row. His 1991 season was particularly memorable as Shaq was named AP Player of the Year, UPI Player of the Year, and won the Adolph Rupp Trophy as NCAA mens basketball player of the year. Following his storied college career, ONeal left early for the NBA Draft where he became the number 1 overall pick of the Orlando Magic in 1992.

In 2011, LSU presented Shaquille ONeal with a 900 pound bronze statue outside of the newly constructed LSU practice facility. Pay homage to ONeals alma mater with this unique LSU collage. "Alpha & Omega" is a limited edition (75) 36" x 15" multi image collage featuring the legendary center. ONeals silver signature has been authenticated by virtue of Upper Deck Authenticateds Five-Step Authentication Process. Cardboard Legends is proud to announce that in 2016 we became an. The relationship allows us to provide you a robust catalog of the greatest memorabilia being produced today. While we make every effort to keep our inventory numbers as accurate as possible, it can sometimes take several days for quantities from Upper Deck to be adjusted, which may result in an item no longer being available. Framed items may be even longer to process at this time.

Due to the mechanics of our relationship with Upper Deck, we cannot provide specific photos and information about the exact item you will receive. Autographed guaranteed and certified by Upper Deck Authenticated (UDA). This item has been hand-signed by the athlete or athletes. This is NOT a reproduced autograph. Size/Product Type: 36" X 15".